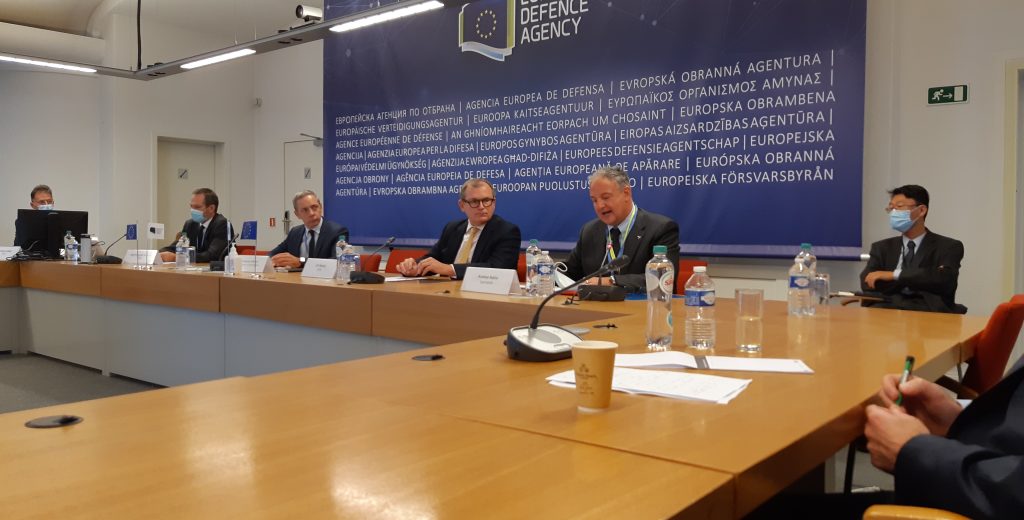 Organised by EDA in cooperation with the OCEAN2020 consortium, on the 27th October the Final Conference took place. The main objective of this event was to present the challenge and main achievements of the largest project in PADR, providing at the same time an outlook for the future of EU collaboration. After a welcome address Jean-François Ripoche, EDA Director for Research, Technology and Innovation and conference chair, presented the conference agenda, also expressing EDA view on the project, proud to be involved in the implementation of a project characterized by technological complexity , inclusiveness, cooperation environment. Andrea Nativi, Leonardo, Senior Vice President Intelligence, Analysis and EU/NATO Policies provided an overview of Industry Vision to future EU Maritime Defence focussed on the maritime issues to be considered at European level. His keynote speech also underlined the concept of Maritime Defence in a Multi-Domains Operations and the disruptive technologies that could support bridging the capacity gap to face new scenarios.

On behalf of the consortium, Antonino Arecchi, OCEAN2020 Project Coordinator, Leonardo provided an overview of the project, its technical, operational and cooperation objectives, the project organization together with the project metrics, which express the huge work done. He also presented the first sea demonstration, which was coordinated by the Italian Navy, with the support of a video realized during the demo.

Ingrid Leijonhufvud, Saab, presented the second sea demonstration that was led by Saab in Hano Bight on the 25 and 26 August 2021, with the related video that is now available in the Second Sea trial page.

The EU-MOC (Maritime Operation Centre) was illustrated by Fernando Barbero, Indra with an overview of the overall concept, the deployment at EDA premises and its role during the two sea demos with some concluding remarks about the main achievement and the future trends. Wilmuth Mueller, IOSB, presented the Technology Development and System Simulation, focussing on the three system simulation trials carried out during the project and their role in the preparation of the live sea demonstrations. Yan Pailhas, CMRE illustrated the concept of NATO Interoperability and the application of a wide range of EU NATO interoperability capabilities in sea demos, from operational planning with mixed manned and unmanned assets to the control of a single vehicle. The Human Factor aspects were illustrated by Tomasz Bajer, CTM , in particular underling the main achievements in operator interface and training tools design. In his presentation Leading to the future, Olivier Reichert, Safran, provided an overview of the research and capability development priorities such as data fusion, autonomy and connectivity of unmanned systems, and introduced the interest and main topics of a follow-on project leveraging on the results and database of OCEAN2020.”At the end of the consortium presentation. Jiří Šedivý, Chief Executive of the European Defence Agency in his keynote speech congratulated the consortium for the project results, with all milestones achieved and all deliverable approved. He also remarked how the successful conduction of the two demos shows the feasibility of the new command chain and that the delay due to COVID19 of only few months should be considered as an achievement. François Arbault, Director for Defence Industry, DG DEFIS, European Commission, underlined that the tangible results and the genuine collaboration among partners could represent a laboratory producing outstanding achievements. He also provided a view to ensure the continuity of the challenge, what has been achieved by a project could be taken over by another one.